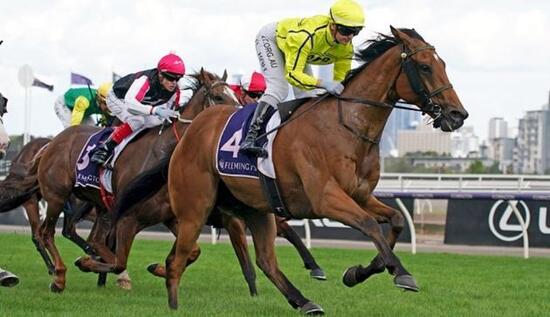 Sirius Suspect is now a confirmed straight-track specialist and like all such horses has the Group 1 Newmarket Handicap in March as his immediate goal after he raced away with Friday’s Group 3 Standish Handicap over the same 1200 metre course at Flemington.

The Saab Hasan-trained sprinter once again confirmed his straight-track credentials when he proved too quick and classy for his rivals under leading jockey Jamie Kah to win the time-honored sprint comfortably.

The victory prompted an emotional response from Hasan, who revealed that simply vying for such entrenched races as the Newmarket Handicap was a dream come true.

"When I migrated to Australia (from Cyprus in 1976), I lived at the commission flats and all I wanted to do was be a horse trainer," he said after Sirius Suspect’s victory.

"I was trying to get a job at Flemington for years and Mick Cerchi gave me a go and this is where I want to cement myself as a trainer."

Sirius Suspect could be the horse to deliver Hasan that big race win that his small stable at Chicquita Lodge on-course at Flemington has craved.

"He was always going to win a listed or Group race," he said. "Tomorrow morning I’ll put him on a truck. Darren (Dance, part-owner) and his team will look after him.

"He’ll have a spell for a couple of weeks and then we might take him to the Newmarket."

Bringing up the second leg of a winning double for jockey Jamie Kah, Sirius Suspect ($2.90) had a length and a quarter margin on the line over $31 chance Albumin with a short head to Defiant Dancer ($4.20) in third place.

Kah said Hasan had prepared her well for the ride.

"That was just perfect," she said. "I haven’t had much to do with Saab before riding this beautiful horse but he knows him so well and he knew exactly what he wanted to do.

"He thought he might want to wander and lay out a bit late, and he did.

"He’s a very horse-orientated horse. He likes being amongst them. He ran absolutely super."

Sirius Suspect has now had 25 starts for eight wins and has earnings just shy of $500,000.

Kah then guided Hasseltoff, who like Sirius Suspect carries the colours of Australian Thoroughbred Bloodstock, to victory in the $135,000 Off The Track Program Handicap (1700m) under benchmark 70 conditions.